When insurance carriers send payment and adjustment information, either on an EOB or an ERA, they often include a code with a small message. These codes are known as CARC values, or Claim Adjustment Reason Codes, and they are an industry-wide standard. CARC values can include a code, an amount, and an additional group code.

You may see a 45 on your EOB or ERA, with a note indicating that 45 means, “Charge exceeds fee schedule/maximum allowable or contracted/legislated fee arrangement.” Number 45 is the most common CARC value, and it indicates that the payer has adjusted your charge to their pay schedule.

If PCC received the remittance electronically, it will record “45” when it automatically posts the payment and adjustment.

If you are posting a payment by hand, you can enter 45 into the Post Insurance Payment (pip) program, along with a CARC amount and group, if provided.

You will be able to review the CARC information in most places where payment history appears, such as the Correct Mistakes (oops tool, the Account History (tater) report, and on personal bills.

While there are hundreds of CARC values, the common ones comprise most of the codes you will receive. Here are the top nine:

How CARC Codes Get Into the Account Record in PCC

CARC values enter your PCC system through autoposting. Both CARC and RARC can be used as criteria for whether an ERA can be autoposted. You can also be enter CARC values manually.

Autoposting ERAs Imports the CARC to the Account Record

When you post insurance payments using autopip, PCC posts the CARC codes indicated by the carrier, if any, along with the amount and group codes which are needed for secondary submission.

PCC keeps the ERA on file so you can review both the CARC and RARC codes later in the ecsreports program or Correct Mistakes (oops).

Your practice can configure which CARC or RARC (in PCC 9.4) should stop an incoming ERA from being automatically posted. Based on your choices, ERAs with certain CARC or RARC values can “drop to manual” for your review and direct attention.

You will see CARC values on your EOBs and ERAs from most carriers. You can enter CARC values into the manual Post Insurance Payments (pip) program.

For each charge, you can enter a CARC amount, code, and group code. If you only wish to enter the CARC codes, you can press F7 – Hide CARC Fields to switch to a simpler view.

Configure CARC in pip: You can turn CARC fields on or off in the Charges and Payments section of the Configuration Editor (ced). You can also select whether one or three CARC fields appear. Contact PCC Support for assistance.

Do Not Post Other Carrier Codes in CARC Fields: If your insurance carrier uses a non-CARC system of coded messages, do not post them in the CARC column. CARC values are a national standard and do not match up with Georgia Medicaid message codes or other carrier codes. Instead, some PCC users use payment and adjustment types to indicate messages from carriers.

Where Can I Review CARC and RARC Values in PCC?

Once CARC values are entered with payments, where can you find them and how can they benefit your day-to-day work? Is there a way to review RARCs that came in electronically?

PCC’s personal bills, whether printed in your office or through a remote ebills service, include CARC values and an explanation of what they mean.

You can review the text of any personal bill and see the adjustment reasons in the Correct Mistakes (oops) program.

Report on the CARC Values Used By Payers

PCC can create reports based on CARCs and amounts. You can create custom CARC reports or use two predefined SRS reports: The “CARC Insurance Detail Report” and the “CARC Summary Report”.

To view a CARC-based report, run srs and visit the Billing and Collection Reports section. 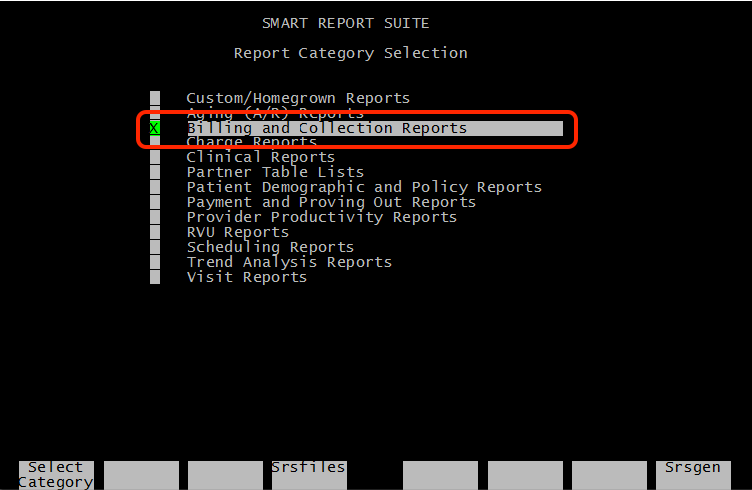 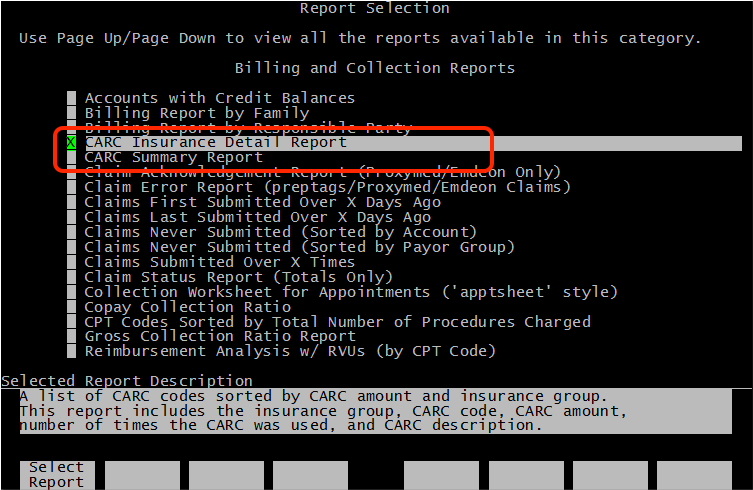 When you run a report you will be prompted for a date range, and you can add additional criteria to customize the report. The results will display CARC information and help you understand trends in payer responses to your practice.

If you would like help creating a custom SRS report that includes CARC information, or other PCC billing data, contact PCC Support.

Chart a Visit in PCC EHR Scroll to top