The PCC 9.1 release includes new features that may need configuration and for which you may want to do extra planning or training. Read below to learn more, and share relevant details with your physicians and staff.

Read the PCC 9.1 Release article for complete details on these features.

Update Your Workstations, Expect Some Slowness On Day 1

After a PCC update, your practice will need to update workstations around your office. Users will see an update reminder on their login screen.

Update Slowness: After you install a PCC EHR update on a workstation, the software needs to cache the code it uses to display information. You will experience slowness until this finishes.

Your practice can now post personal payments (and write off charges) inside PCC EHR. Your PCC 9.1 update will grant this permission to all users who have administrative privileges. After your PCC 9.1 update, use the User Administration tool to update your Roles to include the new tool. 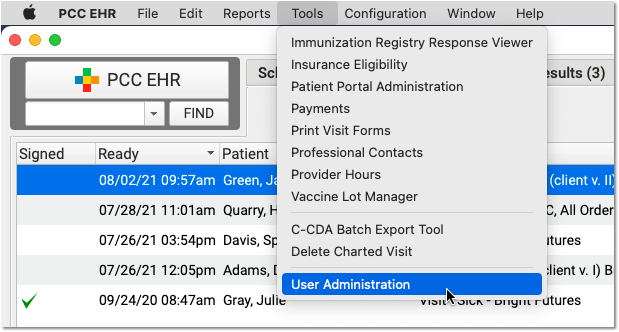 Link vs Unlinked: When you post a personal payment in PCC EHR, the payment is by default linked to unpaid personal charges, starting with the oldest charges first. In PCC’s previous payment tool, the pam program in Practice Management, the default was to leave payments unlinked (unless the user pressed a key to link them.)

Your practice can now edit Account Notes in both the Payments tool in PCC EHR and the previous, Practice Management system’s Family Editor tool (fame). If your billers use this feature to track issues with an account, you may notice some differences.

In PCC 9.1 you can volunteer to pilot test a new tool in PCC EHR that you can use to create and edit your own patient form letters. You should consider becoming a pilot tester if you want to gain early access to making your own patient form letters in PCC EHR and to provide feedback that will inform the future development of the Forms Configuration tool.

Pilot testers will also get a head start migrating their existing patient form letters in the new tool.

Get Started with Forms Configuration

There are a few steps that you and your Client Advocate need to take in order for you to get started with the Forms Configuration tool.

Your Client Advocate schedules a call with you to share information about how the pilot test works and what you can expect to be able to do in the Forms Configuration tool in PCC 9.1. 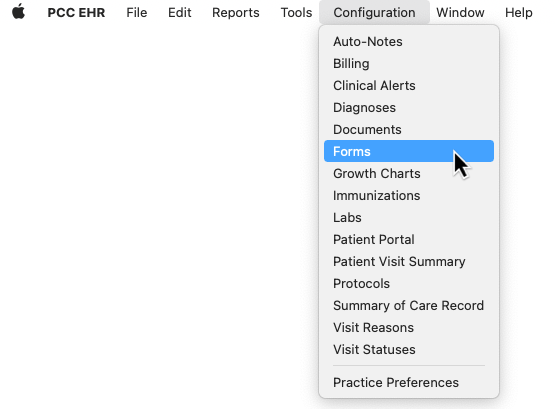 Decide who should be allowed to access the Forms Configuration tool. Then, assign the correct permissions to those users.

In the User Administration tool in PCC EHR, click on the Roles tab and add the Forms permission to relevant user roles, or create a new role just for Forms Configuration access.

If you decide to create a new role, assign it to the relevant users. 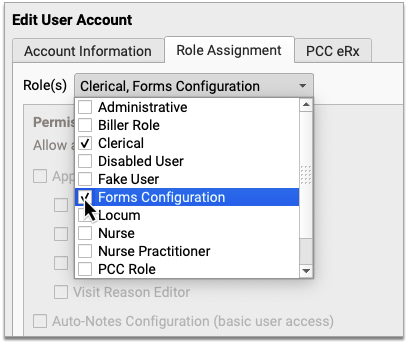 Once Forms Configuration is live, you have the option to migrate some or all of your existing forms from the PCC EHR Forms component into the new tool. Your Client Advocate must complete this step on your behalf. 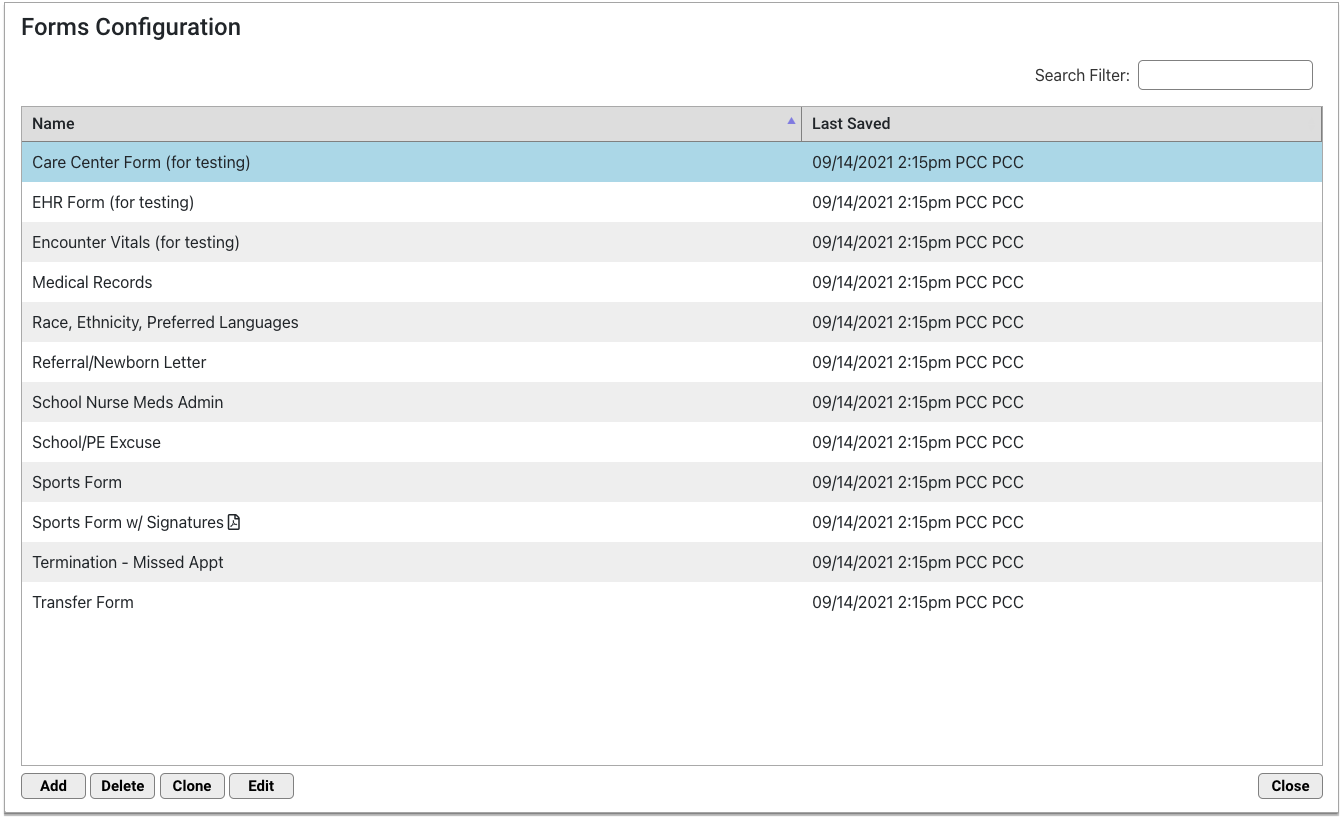 Migrated forms remain linked to the chart note protocols where they are currently configured for one-click generation.

After Migration, Configure Your Forms: After your Client Advocate migrates your existing forms into the Forms Configuration tool, you must configure them for use. The steps you need to take depend on whether the migrated forms started out as text forms or PDF documents. Learn how to configure your migrated forms in Configure Migrated Forms.

What If I Decide to Migrate Later?: If you decide to migrate your existing forms later, be aware that it could overwrite new forms that were created in the Forms Configuration tool in the interim. This would occur in cases where your new forms share a background ID with the forms that you are migrating.

With the Forms Configuration tool enabled, your migration plan in place, and user permissions squared away, you can start making patient form letters!

First, try creating a test form from scratch. You can delete this form later if needed. 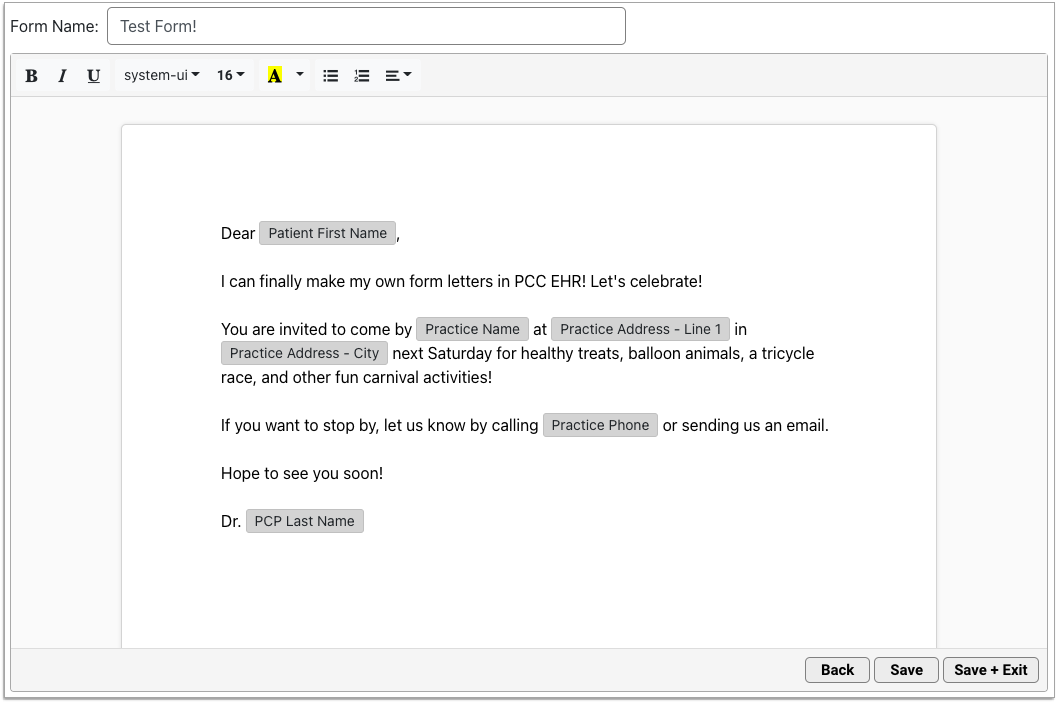 Once you get a feel for the tool, you can start creating realistic patient form letters.

Your Practice Provides Feedback About the Forms Configuration Tool

As you gain experience within Forms Configuration, let your Client Advocate know what you like, what seems confusing or broken, and what could make the tool more useful for your practice. Your feedback during the pilot test will steer the future development of the Forms Configuration tool.

You can see what features PCC already plans to add to the Forms Configuration tool in the PCC 9.1 Release article.

If your Client Advocate migrated some or all of your existing forms into the Forms Configuration tool, you need to take some steps to configure them for use. The configuration steps depend on whether the migrated forms started out as text forms or PDF documents. In a future PCC release, you will be able to generate your migrated forms for patients.

Migrated forms appear in Forms Configuration with the same titles as you are used to seeing in the Forms component in PCC EHR and are indicated as having last been saved by the PCC user on your system. Those with a PDF icon are PDF documents. Those that do not have an icon are text forms.

Your next steps depend on whether the migrated forms are text forms or PDF documents.

Text forms undergo a conversion when your Client Advocate migrates them into Forms Configuration. They retain their titles but not their contents. This is so that you can recreate them using the new text editor within the Forms Configuration tool.

Double-click on the title of a migrated text form to open it for editing.

Use the embedded text editor to recreate the form’s contents within the blank document template. If you have a version of the form saved on your computer or in the cloud, you can copy and paste that text into the Forms Configuration text editor. 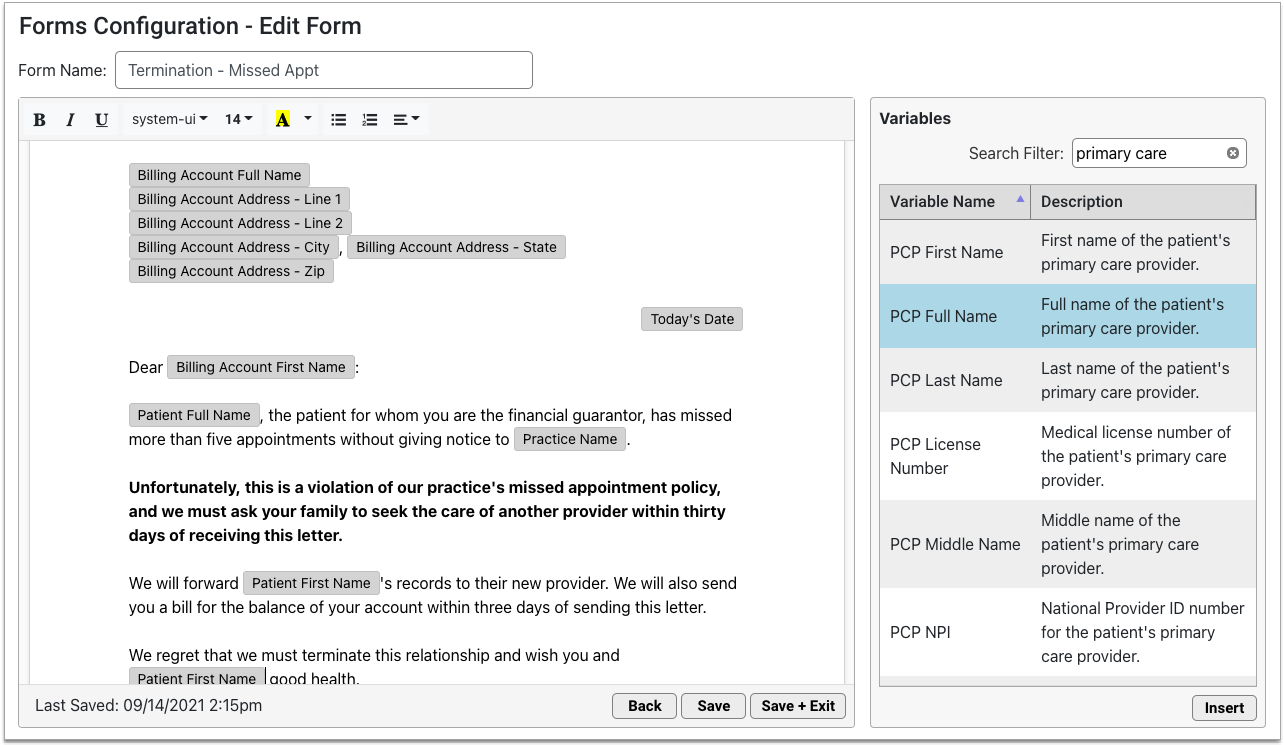 The Forms Configuration tool is still under construction, so you might have to wait for a future PCC release before you can make your migrated text forms look and work just the way you want. You can see what has yet to be added to the Forms Configuration tool in the PCC 9.1 Release article. Tell your Client Advocate if you think you will need something that is not mentioned in the list.

Optionally Review and Edit the Titles of Migrated PDF Forms 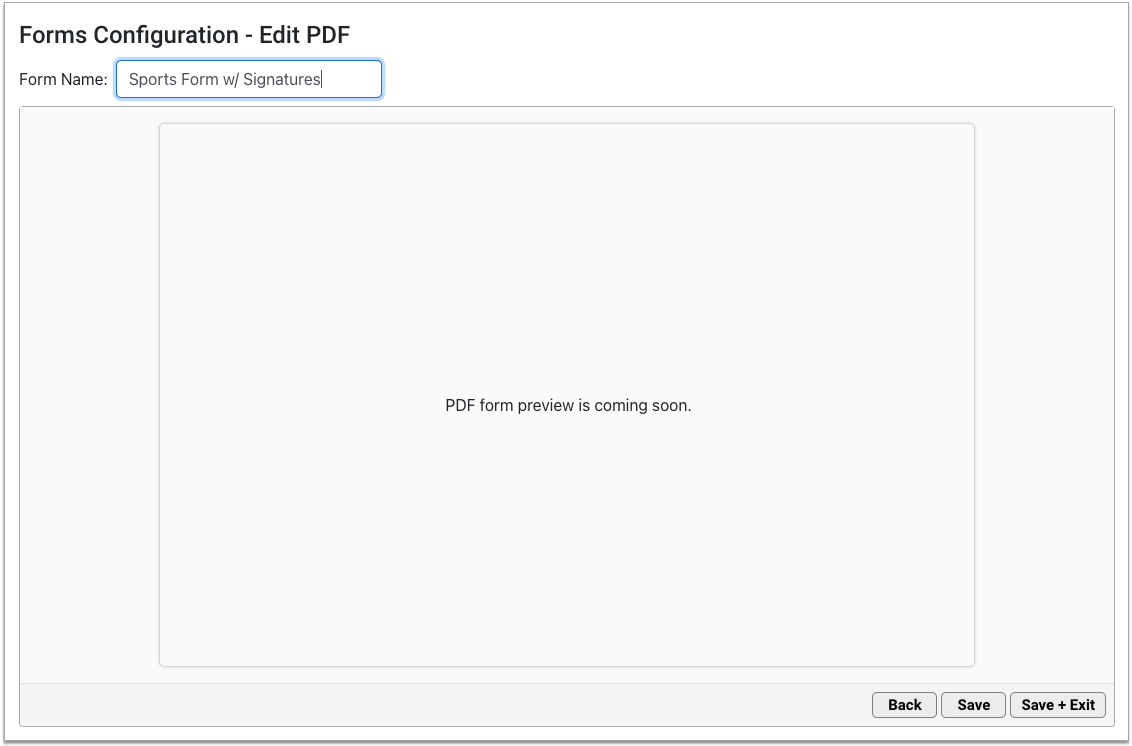 If you want to make changes to the contents of PDF forms in the Forms Configuration tool, you must contact PCC Support.

When you re-migrate a form, the newly migrated version overwrites the existing entry in the Forms Configuration tool and any changes you might have made to it.

If you have questions about the Forms Configuration tool, the forms migration process, or the pilot test, contact your PCC Client Advocate.

Use the Test Results Report Instead of the Lab Test Report

The new Test Results report in the PCC EHR Report Library replaces the Lab Test report that lives under the Reports menu in PCC EHR. 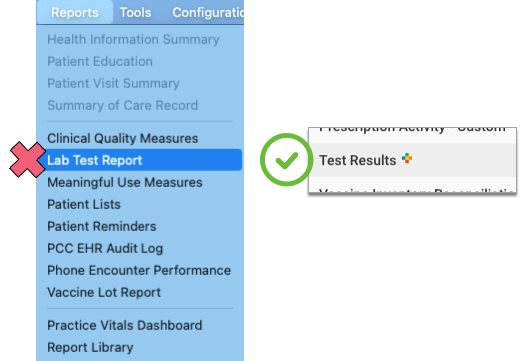 This field was often misused because of its name and placement in the chart, so it was moved and renamed in PCC 9.1. In the new version, staff members can set patients’ immunization registry status under Communication Preferences. 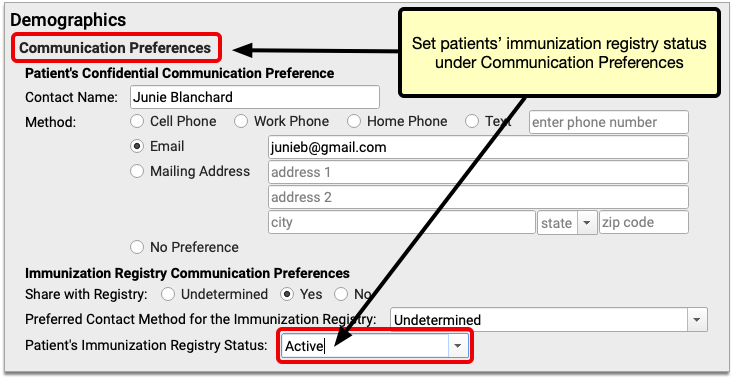 The Patient Immunization Registry Status field is only visible at practices where it is enabled within the Communication Preferences component.

Add VAXELIS Vaccine to Your System

If your practice plans to administer and bill for the new VAXELIS combination vaccine, contact PCC Support.

If your practice administers the Pfizer-BioNTech COVID-19 vaccine, and you administer (or plan to administer) booster shots (a third dose), contact PCC Support for help adjusting your configuration. PCC has seen claim delays and rejections without proper configuration. (In an upcoming update, PCC may implement these configuration changes for all practices.)

When a manufacturer stops providing security updates for an operating system, PCC ends support as well. If your practice is still using workstations that run Windows 7 or MacOS 10.12, that support has already ended and you should upgrade those machines.

Apple is expected to end support for 10.13 in 2021. PCC EHR includes a reminder to users when they log in on workstations running older operating systems. The reminder encourages them to review and update their operating system. Contact PCC Support for recommendations.

PCC EHR requires a workstation running on Windows 8 (or higher) or MacOS 10.14 (or higher). For more information, read Hardware Guide: Your Personal Computer and Equipment.